Task 4
Yet another very slow, tough day. A 60.8km task to Baanbaa with no turn points was called, launch window opened at 2:15pm with five start gates 15 minutes apart the first at 2:45pm.
Shortly after the launch opened the sky in front got very crowded as the climbs were very slow low down. The slow climbs and small thermals resulted in a number of midair collisions, the first I saw resulted in one pilot deploying there reserve. Another (I didn’t see) resulted in both pilots deploying there reserves; unfortunately they were locked together and spinning down. I am not sure of the outcome, but understand one pilot has back injuries.
Conditions on course didn’t change much. I took the third start gate and made reasonable progress taking a more northern rough along the rangers were the clouds looked better. After the Narrabri gap a large cloud toward Mt Kaputar cast a large shadow and slowed progress. My gaggle was forced to drift in slow climbs. We were drifting NW and getting in a position that left us with a into wind leg to goal. The head wind proved too much and I landed 5.2km from goal.
Thomas landed around 4.9km short after taking an earlier start time.
Harmo landed about 33km from goal. Unfortunately she bombed first up and was held up on launch for her reflight.
26 pilots managed to complete the task in good time considering the tricky conditions.
Two comp days left. I hope we get some racing before the end of the comp.
Middy.
Posted by Team Kahu at Wednesday, March 07, 2007

Well that's shaken the results up a bit! Good effort on another tricky day. I hope it didn't seem too much like Brazil.

Quite a few top pilots didn't do so well, it must have been an entertaining bomb out field. Good work Harmony for getting back up and away.

Hopefully today will have some real thermals.... 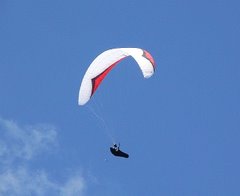